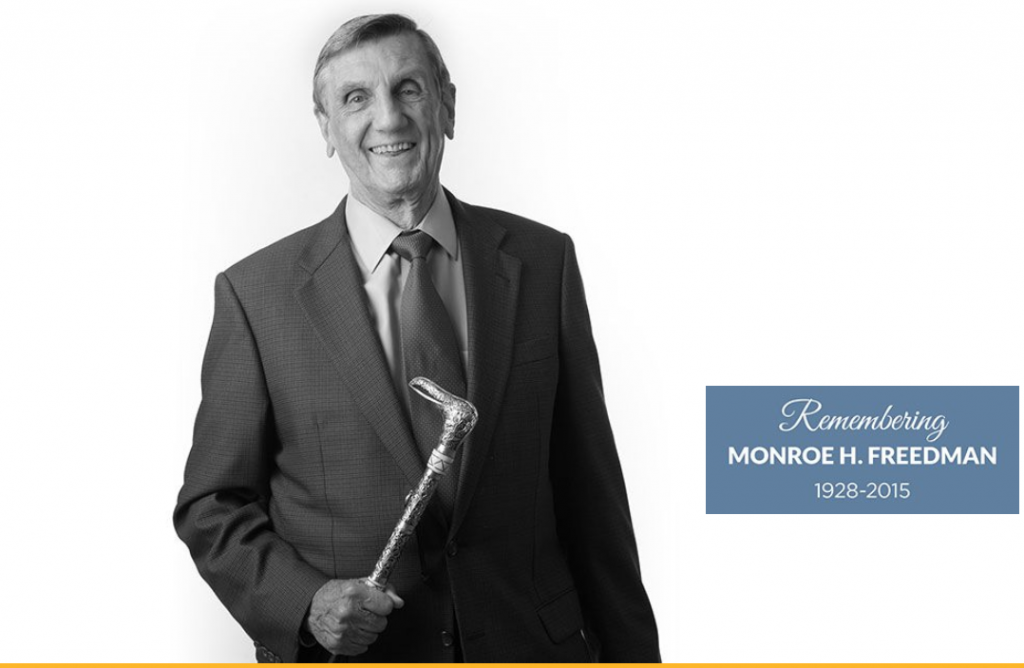 The Monroe H. Freedman Institute for the Study of Legal Ethics, founded in honor of one of the profession’s most influential legal scholars, seeks to focus the attention of law students, scholars, judges and practitioners on today’s most significant issues for the legal profession.

The Freedman Institute sponsors programs and conferences for scholarly inquiry and brings together practitioners, judges and scholars to examine critical aspects of the delivery of legal services.

It also trains law students to take responsibility for serving others, and it provides practical experiences to do so.

Monroe Freedman schooled generations of law students and implored colleagues to “make a difference.” The Freedman Institute seeks to enhance his legacy.

Monroe Freedman left an indelible mark on the Maurice A. Deane School of Law at Hofstra University. As the Law School’s second dean from 1973-1977 and as a professor until the time of his death, he helped to define Hofstra Law and establish our reputation as a place where social justice and ethical lawyering form our backbone. His towering figure, both literally and figuratively, resounded through our hallways and impacted generations of Hofstra Law graduates.

His extraordinary accomplishments in bringing legal ethics to the forefront and creating a field of study where none previously existed are unparalleled and respected by all in the legal community. In the classroom and beyond, he was what is known today as a “disruptor.” He helped us to question the status quo and made us think deeply about the complexity of legal representation, particularly for those marginalized by society.

To forever memorialize Monroe’s name at Hofstra Law and in recognition of his work, it is only appropriate that we name the Institute for the Study of Legal Ethics after him. We have set a goal to raise $1 million to support the work of the Institute. The first $500,000 raised will support the Institute’s operations, and $500,000 (or any amount raised beyond the initial $500,000) will establish an endowment to ensure the Institute’s future. We are proud to announce that gifts of $450,000 have already been pledged. We are now seeking your contribution, in memory of Monroe, to help us to reach our goal.

Along with founding the Institute, Monroe created a program of conferences that addressed some of the most fascinating and controversial legal ethical issues faced by lawyers and the legal system, and brought the best legal minds to campus. These conferences included “Judging Judges Ethics,” “Lawyers Ethics in an Adversary System” and “Lawyering at the Edge.”

The Monroe H. Freedman Institute for the Study of Legal Ethics will not only continue these biennial conferences but will expand its offerings to include fellowships for outstanding students interested in the study of legal ethics, CLE programs and other lectures/discussions that focus on the important legal ethics issues of the day. It will also continue to create scholarship and commentary in the tradition of Monroe, whose prolific writing never ceased to provoke us.

No Hofstra Law professor has touched as many lives as Monroe Freedman. There were those who agreed with him and those who did not; however, all admired and respected him. We can think of no better way to honor Monroe than to name after him the Institute that he valued so highly. We sincerely hope that you will support this effort with a gift in his memory.

On Wednesday, September 30, 2015 a memorial service celebrating the life and work of Professor Monroe H. Freedman was held at the Hofstra University Club.

“Monroe Freedman was an incredible teacher and a nationally-renown scholar. He also was a fierce advocate for social justice whose life and career were defined by a passion and profound respect for the power of the law to change and improve lives. His energy, zeal and determination inspired students to become better lawyers and better people.”
— Hofstra University President Stuart Rabinowitz

“When I was hired 38 years ago by Monroe, then dean, I asked him “What are your expectations for me?” He gave me only two directives: Be a great teacher and make a difference. No person has embodied these ideals, both personally and professionally, better than Monroe. His impact on the Law School, the legal community and on his colleagues is indelible.”
— Hofstra Law Dean Eric Lane

“I could not be prouder of my association with Monroe Freedman. I will miss his courage, his conscience, and his love.”
— Abbe Smith

“I had the remarkable privilege of being Monroe Freedman’s colleague at Hofstra for twenty years. From the day I arrived at Hofstra he radiated encouragement, creativity, and passion for the ethics of our profession. He was a friend, a mentor, and an inspiration. He was a unique and towering figure, a legend in our time and for all time. No one like him will pass our way again. I will miss him dearly, and we are all fortunate that he was in our midst for so many years.”
— Roy Simon

“For me he was more than a great figure in legal ethics. After we “met” through our mutual blogging on Legal Ethics Forum, he became a beloved friend. He was 40 years older than I and his life experience was very different from mine. But Monroe had a rare capacity to take an interest in people and to act with generosity towards them. I was lucky to be a beneficiary of that.”
— Alice Woolley

“He invented legal ethics as a serious academic subject. Prior to Freedman, legal ethics was usually a lecture given by the dean of the law school, which resembled chapel: ‘Thou shalt not steal. Thou shalt not be lazy.’ But Monroe brought to the academy the realistic complexity of what lawyers actually face.”
— Alan M. Dershowitz

“As I was happy to have had the chance to say publicly in Monroe’s presence, he was the greatest teacher I ever had in any classroom setting, and the A I got from in Ethics I consider to be the greatest academic achievement of my life.”
— Jeremy Goldberg ’88

“What a remarkable person. Friendly, warm, inviting. Razor smart, always inquiring. Smiling. Teaching, all the time. A huge loss not only for our school, but for the entire legal profession. Monroe will forever be a part of the school and all of us who had the extraordinary opportunity to know him.”
— Michael Patrick ’78

“My heart is sad. Monroe Freedman was the best teacher I had at Hofstra Law in 1984 and there were so many great ones. His dedication to ethics made a huge impact on my approach to the law and to life. I am so thankful our paths crossed for those three years and afterwards at ethics conferences. I will miss his presence but will always remember his teachings.”
— Robyn Ringler ’87

View more remembrances on our Facebook page and the Legal Ethics Forum.

The following is an excerpt from the New York Times obituary for Monroe on March 2, 2015.

Monroe Henry Freedman was born on April 10, 1928, in Mount Vernon, N.Y.; his parents, Chauncey Freedman and the former Dorothea Kornblum, ran a pharmacy there. The young Mr. Freedman earned a bachelor’s degree from Harvard, followed by bachelor’s and master’s degrees from Harvard Law School.

Near the start of his career, Professor Freedman served as a volunteer counsel to the Mattachine Society, the early gay-rights group; from 1960 to 1964, he was a consultant to the United States Commission on Civil Rights. In the early 1980s, he was the first executive director of what became the United States Holocaust Memorial Museum.

Professor Freedman taught at George Washington University before joining Hofstra in 1973. As the dean of Hofstra’s law school from then until 1977, he was credited with helping to give the school, founded in 1970, a national profile as a teaching and research institution. He was also a visiting professor at Georgetown.

Professor Freedman’s wife, the former Audrey Willock, whom he married in 1950, died in 1998. Besides his granddaughter Ms. Izquierdo Lodhi, his survivors include a brother, Eugene; a sister, Penny; a son, Judah; a daughter, Alice; six other grandchildren; and three great-grandchildren. A son, Caleb, and a daughter, Sarah Freedman-Izquierdo, died before him.

His other books include “Lawyers’ Ethics in an Adversary System” (1975) and “Group Defamation and Freedom of Speech: The Relationship Between Language and Violence” (1995), which he edited with Eric M. Freedman. With Professor Smith, he was the editor of “How Can You Represent Those People?” (2013), a collection of articles about a lawyer’s obligation to take on distasteful clients.

At his death, he was a professor of law at Hofstra University, on Long Island. Professor Freedman’s book “Understanding Lawyers’ Ethics,” written with Abbe Smith and currently in its fourth edition, is assigned in law schools throughout the country.

We're not around right now. But you can send us an email and we'll get back to you, asap.